In 2017, Jeffrey Eugenides was one of the writers appearing at the Portland Book Festival (fka Wordstock). I was at the festival to hear him and a few other writers talk about writing, and he is just as entertaining to listen to as he is to read. Unlike some authors, he is an entertaining public speaker with a sense of humor, which comes through in his first novel, The Virgin Suicides (1993). The following analysis includes spoilers, and If you decide to read the novel, be aware that the introduction by Emma Cline includes quotations and commentary that are probably more enjoyable if you encounter them while you read the book. Cline’s introduction was also published separately as “The ‘Virgin Suicides’ Still Holds the Mysteries of Adolescence” (The New Yorker, Oct. 2, 2018). 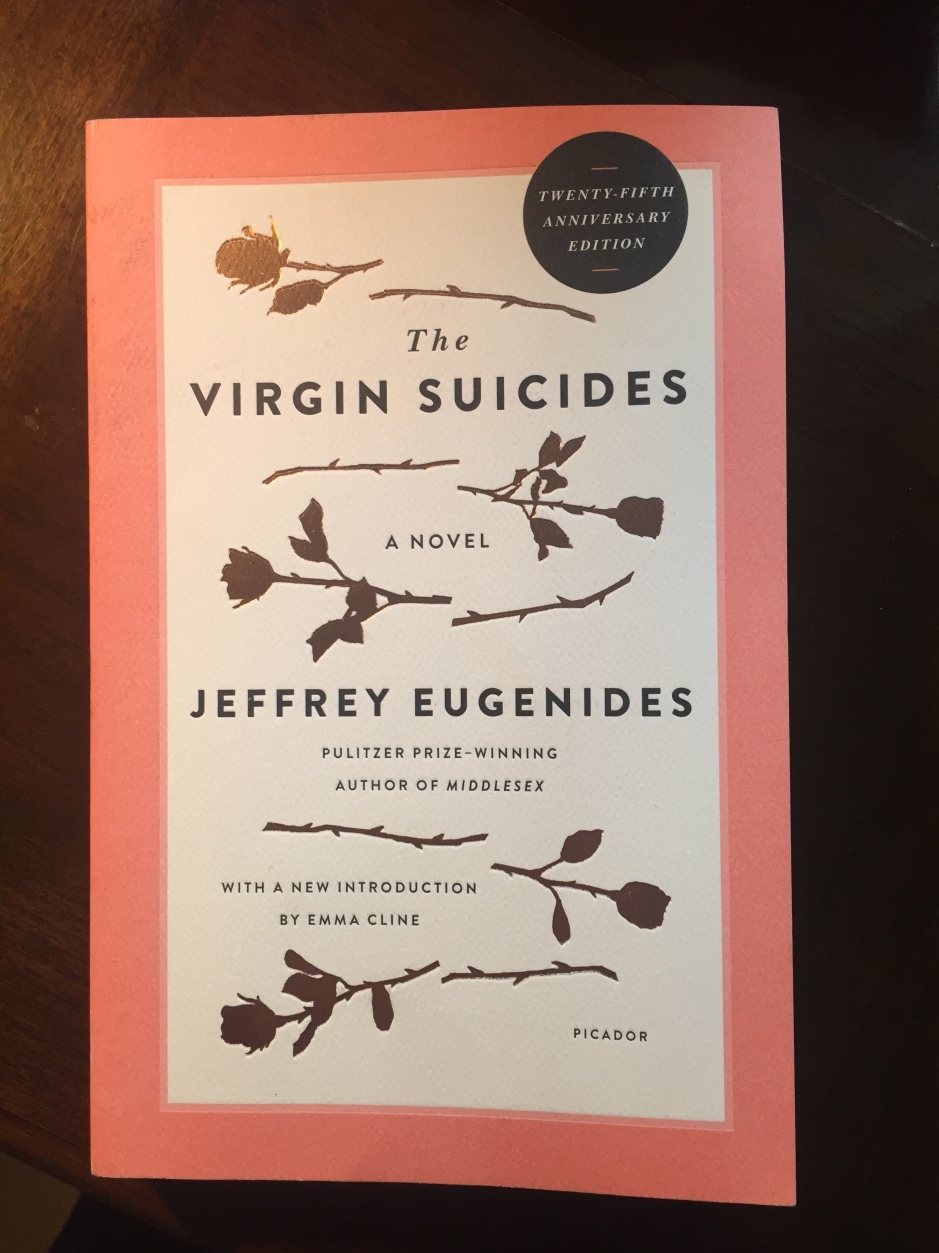 Back to Eugenides’ sense of humor. The Virgin Suicides is a coming-of-age story with the added twist of knowing from the beginning that all five of the Lisbon family sisters commit suicide, turning the narrative into a mystery, as well as a novel-length elegy. Fortunately, the author understands that if you are going to depress your reader right away, some comic relief is necessary. He accomplishes this through the use of detail and imagery, such as when he describes one of the sisters, Cecilia, as having “…colored her lips with red crayon, which gave her face a deranged harlot look….” (24). As a teacher who spends time around teenage girls, I have witnessed a variety of make-up application strategies, including Cecilia’s deranged harlot technique. Later, Eugenides notes how different families in the neighborhood raked their yards. “The Pitzenbergers toiled with ten people–two parents, seven teenagers, and the two-year old Catholic mistake following with a toy rake” (87). Without periodic levity, readers would become disengaged with what would otherwise be a much darker story.

It’s important to note, though, that the author manages to balance the inclusion of detail and humor with moving the story along at a reasonable pace. If you have ever read a novel where you felt bogged down by too much detail, you will appreciate Eugenides’ writing.

The structure of the novel is a fairly straightforward, chronological flashback, but the story is told with a first person plural point of view (hence the ubiquitousness of “we,” “our,” and “us”), and includes commentary from other characters who provide insights into the lives and deaths of the Lisbon girls. Yet, there is only one person employing the use of these pronouns: a middle-aged man reflecting on the experiences of he and his male friends as they tried to socialize with the Lisbons. It would have been difficult, of course, for Eugenides, a male writer, to write the story from the girls’ point of view. The inclusion of the other points of view, though, improves the story in that it accurately reflects an important aspect of adolescence, that is, the tendency of young people to navigate through high school as part of a small group. In this story, it is a group of teenage boys trying desperately to learn as much as they can about a mysterious family by examining every possible clue they come across. And to reinforce the investigatory nature of the story, the narrator recalls various interviews that have taken place, and labels the different items of information as evidentiary exhibits–just as a detective would do in a criminal case file.

Another aspect to the narrators’ point of view is that it is almost always the view of males observing females, and critics (such as Cline) have pointed this out. However, it would be incorrect to say that the “male gaze” makes the story less effective or entertaining. After all, it is a story written from the perspective of a group of men reflecting on their experiences with the Lisbons. On the other hand, would it have been difficult to include narration from a female peer of the Lisbons? No. Eugenides could have created a female friend of the narrators or the doomed sisters, and this kind of character would have given the story more narrative balance, but it may have brought in too much information, thereby explaining away some of the mysteries that give the story its appeal.

Adding to the appeal of the story is the soundtrack Eugenides provides. All of the characters lived in a Midwestern suburb in the seventies, and if you were a teenager during that time, you will probably remember the music the characters play over the phone to each other, holding a phone receiver next to a record player. The importance of music when you are growing up, along with the technology of the era, are more details that the author gets right.

The suburban setting allows Eugenides to use diseased and dying elm trees to symbolize the girls’ inability to escape the contagion of suicide. As a work crew gets ready to cut down a once-healthy tree recently infected with Dutch elm disease, the Lisbon girls (who have formed a suicide pact) surround the tree, ironically, to preventing its death. The narrators, perhaps, were trying to save the Lisbons by continually trying to get as close as they could.

Thematically, the novel attempts to answer the question of why people–particularly young (and presumably healthy) people–kill themselves. Within the story, there is a certain amount of speculation as to the reasons why the suicides occurred. Eugenides, wisely, refuses to give us a clear answer, and his narrators are haunted by this mystery throughout their lives. Often, popular writers wrap everything up neatly for their readers, answering every question, as if unresolved issues and ambiguities are problems that must be solved by the end of the story. They aren’t. In fact, leaving some questions unanswered is one of the ways great literature makes us think.

Then there are the questions you have when there appears to be something going on that doesn’t make sense in terms of realism. Eugenides includes realistic detail, such as Dutch elm disease and specific songs, but we also have moments of magical realism, too. An example of this technique is the Lisbon girls’ failure to simply leave their house, which they could have done easily, but didn’t. Instead, they allow themselves to be imprisoned in their home with their parents. Their lengthy absence from school is tolerated by the community, even though Mr. Lisbon is a local teacher.

During this internment, one of the sisters, Lux, repeatedly has sex on the roof, but neither she nor any of her visitors are ever caught by her parents, despite Lux being observed by others. The improbable nature of this scene reminds one of Marquez’s One Hundred Years of Solitude. Whether the magical realism detracts from the quality of the story is a question best answered by individual readers. For me, it made the story more entertaining, but I happen to like that particular writing technique.

Lastly, some book group advice: The 25th Anniversary edition (pictured above) notes that he won a Pulitzer prize for his 2002 novel, Middlesex, which is a little over 500 pages long, twice the size of The Virgin Suicides. So which one should you read first? When I read someone’s writing for the first time, I like to start out with their first (and usually, shorter) work. In addition, the inclusion of an introduction with this edition provides someone else’s insights to discuss.